Check Your Award Reservations For Changes

I booked an award reservation for a friend earlier this year for travel in September and forgot about it.  I recently was on United.com looking at my reservations and pulled up this award flight to find there was a change.  United downsized a CRJ-700 to a CRJ-200 and my friend lost his first class seat. The reservation message wanted me to click ‘Continue’ to accept the change and move on.  I didn’t want to accept the change and instead clicked to the home page and looked for a better option.  I was able to find a first class seat on an Air Canada E175 and called United to make the change.  The agent found the award seat and updated the reservation.  My friend now has a larger seat, TV, meal, shorter lines, and free drinks.  Just because United updates your reservation, you don’t have to accept it.  The agents can be very flexible too because it was an airline initiated reservation change.

Posted by FrequentFlyerGuy at 10:20 PM No comments:

Barcelona Spain and the Four Points by Sheraton

I made a deal with my friend that I would cover the flights if he covered the hotels.  As part of this arrangement, I picked the flights and he picked the hotels.  I was partial to the W Barcelona, but since it wasn’t my dime, we were at the Four Points by Sheraton Barcelona (FPBS).  We anticipated spending most of our time sightseeing, so it should not make much of a difference.

The Air Canada flight landed around 8AM and we were quickly through customs and to the taxi stand.  We went to the hotel to drop off our bags, grab a map, and start looking around the city.  The FPBS is in a business area of town and four subway stops away from city center.  The room was a normal sized room by European standards with a weak air conditioner that was loud and clunky.  I picked the free breakfast SPG Platinum amenity and enjoyed the morning spread.  There was usually a long wait at the front desk, but the agents were friendly and somewhat helpful. 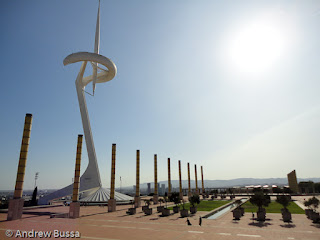 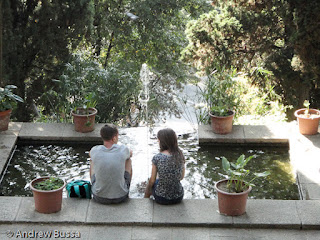 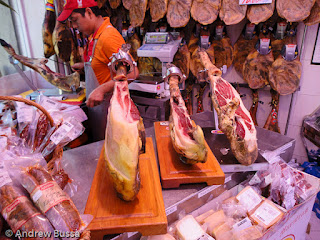 Antoni Gaudí is an architect that left his mark on Barcelona, a very unique mark.  The three places to go and see his work is the church of Sagrada Familia, Parc Güell, and Casa Batlló.  Sagrada Familia is a basilica that is still under construction.  The church is beautiful and worth the €10 to visit.  Parc Güell is a large park in the north of town.  It has some very unique design elements and the world’s longest bench.  Casa Batlló is a house built, and completed, by Gaudi on the main shopping boulevard.  It is an amazing architectural sight.
Picasso worked in Barcelona for some time and there is a decent Picasso museum in the old town.  It follow’s Picasso’s works through his life.  There aren’t any iconic works on display, bigger museums and private collectors have those, but it is still an interesting collection that shows his evolving style over time.
The Old Cathedral in downtown was my favorite spot in Barcelona.  I will always go into an old church and always be impressed.  The Barcelona Cathedral has a lovely courtyard off the side and it is peaceful and relaxing.  I grabbed a seat and cleared my mind.  It was a wonderful experience. 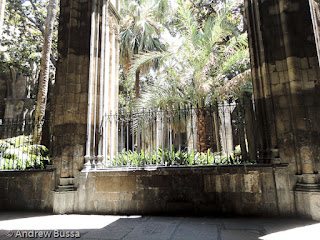 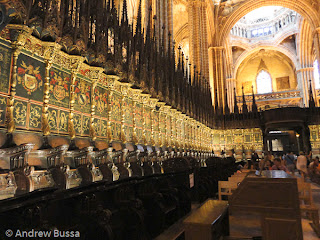 The beach at Barcelona is a big deal.  Like its why most people visit Barcelona.  It’s huge and packed with people.  My friend and I were on a sightseeing trip, not a beach holiday, so we didn’t spend much time on the sand.  It looks like a great spot for a beach holiday and I want to return and be a beach bum for a few days on another trip.  If you are doing the beach, stay at the W Barcelona.  It’s on the beach and looks like an amazing hotel. 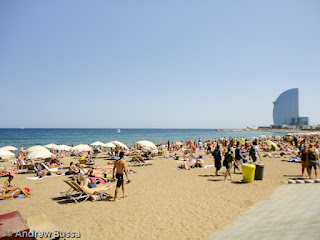 The monastery at Montserrat is a day trip into the mountains.  It has a beautiful church and miles of trails through the hills with breathtaking views. 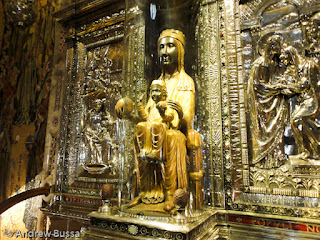 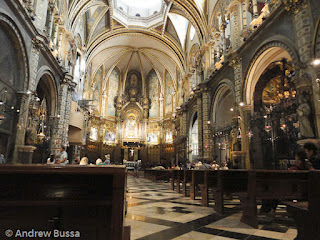 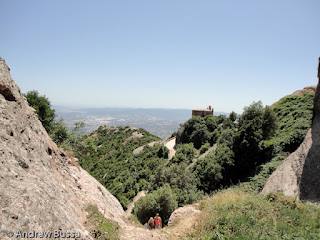 Barcelona is a great walking town with numerous cafes that all look great and are worth a visit.  Jamon Ibiricos is plentiful, though up to $100 per pound, and a taste is required on any visit.  We stopped at Pernil 181 and had our picture taken in front of the wall of hams.  We also picked up 100 grams of ham to have in the park outside.  It’s only a few blocks (downhill) from Parc Guell and worth a stop. 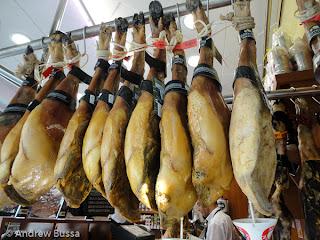 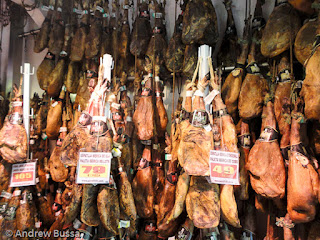 When our three days in Barcelona were over, we headed back to the new terminal at BCN to continue the trip to Vienna.  I need to return to Barcelona and do a proper beach holiday; definitely staying at the W Barcelona, but maybe not in July or August.
Posted by FrequentFlyerGuy at 9:39 PM 1 comment:

A friend from high school called me up late last month wondering if we could do a trip overseas in July.  My schedule had some flexibility to it so I started finding trips we could do on United MileagePlus miles.  We were able to settle on Barcelona, Vienna, and a half day in London for 60,000 miles; a very good deal.

The first leg of the journey was from Denver to Toronto to Barcelona.  My friend was originating in Chicago and we planned to meet at the international Maple Leaf Lounge in Toronto.  I was flying an A319 to Toronto connecting to a Boeing 767 to Barcelona.

The Airbus part of my flight was great.  There was plenty of leg room and a FREE video on demand entertainment system.  The system has a great collection of new and classic movies, along with games, a map, and music.  I watched The Good, the Bad, and The Ugly.  It happened to finish just as we were landing and made the flight go very quickly.
The service was friendly too.  The lead flight attendant looked like a jovial lumber jack that could be in tourism commercials.  I also got a kick out of the bilingual announcements, as required by law, not the makeup of the passengers.

After landing it was a quick walk to the transfers desk, stamp in the passport, and a quick walk to the lounge.  To speed the trip, Toronto Pearson Airport has moving walkways that go faster in the middle than at the ends.  It was my first time using them and it was fun to see the clever solution to an engineering puzzle.
The Maple Leaf Lounge is on the second level (my friend walked right by it and spent a while looking for me on the departures level) of the international terminal.  This is their flagship lounge and it has plenty of seating broken up into different areas so noise doesn’t travel and to give a more private feel.  It also has free wifi, conference rooms, showers, a business center, and of course self-serve bar and hearty snacks.  The drink spread was very good, but the food was superb.  Air Canada’s lounges have some very good soup offerings and this was no different.  There was also some very tasty pasta available that reminded me of grandma's.

I left briefly to find my friend and check out the duty free prices.  We were able to locate each other and went to the lounge for a pre-departure toast to our trip.  Our flight had a maintenance delay, so we were able to make a few more toasts before departure.  The aircraft for the trip to BCN was a 767 that Air Canada had not converted to the new business class and video on demand in coach.  The seats also were not very comfortable, so before we pushed back, I knew I was in for a long trip.
The meal service started soon after takeoff and I enjoyed a very tasty chicken dish. The brownie was also very good.  Soon after dinner, I tried to sleep.  It didn’t go well.  I went to the back of the plane to see if any sets of 3 seats were open to lay down on, but enough people already had that idea and I was out of luck.  I wound up taking a set of two free seats, built a pillow fort, and tried to fall asleep.  I don’t know why, but nothing worked.  I might have been out for 30 minutes tops.   After a seemingly endless struggle, I spotted land (Spain looks like the American southwest from the air) and we started our approach.  Landing took us over a few sights and we quickly taxied to the gate, so fast that the crew hadn’t finished the French version of the announcement.  I was soon off the plane, not rested at all, but excited to experience Barcelona.
Posted by FrequentFlyerGuy at 7:57 PM No comments:

$60 Off a Lufthansa Flight

My colleague Justin sent me a link for $60 off a Lufthansa flight.  It's good for travel from August 12 to September 12 and must be redeemed by the end of May.  Good on Lufthansa and their code share partners United, Air Canada, and Austrian.  Travel must originate in the USA.

Posted by FrequentFlyerGuy at 10:53 AM No comments: